What's on your mind?

My friend and I had a hunt initiate after placing a second DOTS in Nursery on Tanglewood. After we left our collective sanity, between the two of us, was 82% at the lowest fluctuating average. The Wiki says highest threshold is 65%.

The Oslo is A Ghost that like's to be Alone Where he/she Died, If you spend too much time in his/her ghost room, with a certain amount of individuals in the room, the ghost will have a decent chance to hunt, This Ghost is Scared of an Crucifix, Placing one in it's room, will lower the the hunting chance.

Strengths: Hunt's with a certain amount of players in the it's ghost room.

Weakness: Exponentially Lowered the Chance of an Hunt if there is a Crucifix in it's ghost room.

Desc: An omen is a deadly ghost that feels pain when it sees alive humans and their equipment. Based on what we have learned, they usually attack the hunters trying to get rid of it even though they have died. They are known to be more aggressive the more van items there are inside of the location. However they seem to feel guilty around cursed possessions.

Strength: An omen has a high chance to instantly begin hunt with only a few van items inside the location no matter what your sanity is.

Weakness: Omen's feel guilty about cursed possessions. They will be frozen in place when using one and they will drain little amounts of sanity during ghost events. However, this weakness does not last long and it does not work during a hunt.

Strategies: Since this ghost hates even little amounts of van equipment, try to avoid bringing in too much, only bring stuff such as evidence equipment and maybe a lighter and a smudge stick in case the instant hunt activates.

Probably not as good as a previous idea i had called Ghoul. But it still sounds scary.

There's a guide on Steam that use tons of stolen content directly from the wikipedia.He reworded since a few parts to look legit and now added a disclaimer following a forum ban. The guide should be reported and taken down! https://steamcommunity.com/sharedfiles/filedetails/?id=2698781693&

I was playing through a round with my sis and bf today, and I was in the truck, viewing the camera. My bf was beside me viewing it as well, while my sis was in the cursed room, trying to get a photo of the ghost. While she was there, I heard a voice say "I got your friend" through what I believe is her walkie talkie? My bf didn't hear it, but every time I tried to tell her what the ghost said, the ghost would start messing with the electronics.

Not sure if this is a new thing that was just added, but I was just wondering if anyone else experienced this too LOL. I wish I got a clip of it!!

I was trying to find the ghost room and set up in Willow Street house and while looking for gorbs with the video camera, I saw something I've never seen before fly across the room, sort of up near the ceiling in the garage. I was freaked out and just went back to the lobby after that, so I didn't see it again to get a screenshot, but I tried my best to draw what I saw. Note, I don't know whether or not I could see it beyond the camera since I hadn't turned on any lights, so all I could see was the camera and its screen. 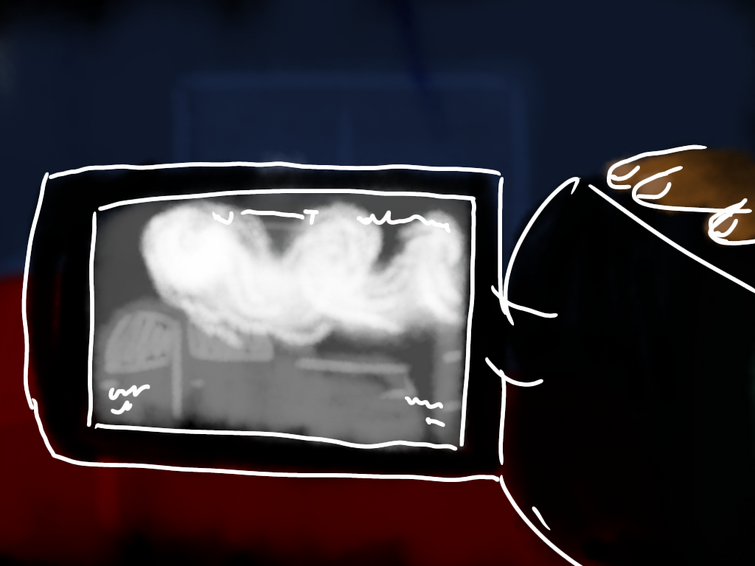 Does anyone know what I saw, and/or what it meant? Was it a really zoomed-in gorb? An ghost event? Interaction of some sort? Please help me understand this.

This spirit isn't actually deceased, so if you ask the ouija board age related questions that are asking how long the spirit has been there, you will never get an answer. This ghost is extremely active and aggressive so it is kind of a cross between a poltergeist and a demon. Don't confuse it with them though!

Very aggressive, if you're below 10% sanity, hunts will occur every 10 seconds.

Sanity cannot be drained by any other methods then ghost events and ouija fails, and even those take away less sanity then normal ghosts.

More to how the spirit hasn't actually died, the person that became this entity was extremely angry and they then withered away so much that they became inhuman and couldn't actually touch anything, just float it with its mind. It throws things around the room a lot because when it realised this, it became obsessed with trying to keep the power because then they realised what happened and they were trying to keep as much human as they could. This is why they loathe and are jealous of humans so they are this aggressive.

Feel free to leave some feedback and constructive criticism.

How much have we able to noted the changes so far? The vague one by the way.

Currently, almost every job feels identical and the ghosts just aren't unique enough at all. These are all additions onto what every ghost can already do, to try and make them feel different from each other and to make Nightmare mode ID tests more interesting.

Description: A ghost that likes variety of the places it haunts. The ghost (name) is a ghost that never likes the same place and loves to explore the area themselves. When other people arrive to discover the place it wants to be alone and it becomes aggressive and will try to scare them with the fuse. It seems to be very camera shy however.

Strength: The ghost will always wander far away from its first room and pick a new room to explore in preparation phases, making it harder to find and track after hunts.

Weakness: The ghost is very camera shy and when taken a picture, It will run away from the flash and reveal itself for a couple of seconds before going invisible again.

Additional notes: The ghost is very brave when hunting so it's weakness will not work during a hunt.

Strategies: Since it is camera shy, always bring a camera if you feel it will start a hunt soon, and when you find the ghost room. Spread out and try to find out where its next room will be after a hunt. Keep on teammate near the fuse box in case the ghost tries to turn it off. Not a difficult ghost but a ghost that can trick you a little bit

What do you think about this type? Do you think it should be added to the game? What name should it be? Let me know!

Aucourned Desc: The Aucourned is a Ghost that hates Water, This Ghost usually don't have a ghost room that has a sink, bathtub, Washing machines or lakes, It will try to confuse you in the Ouija board that its in the room that have with Sinks, Bathtubs, Washing Machines.

Strengths: This Ghost will be Faster and Lower your Sanity in Rooms without Sinks, Bathtubs, Washing Machines and Lakes, And Try to Confuse you in the Ouija Board.

Weakness: The Ghost is Slower and Powerless in Wet Environments, Including the Weather.

Description: Normally the byproduct of violence, the Chindi, a spirit coming from the Navajo beliefs, is made up of everything that was bad about the person who died. Failing to properly honor the burial of a person can also bring about a Chindi, as well as even mentioning the deceased's name. The Chindi are knows to haunt the houses they die in for decades. Navajo believe contact with this ghost can bring the victim a disease they call "ghost sickness".

-Will almost never roam between rooms

-In normal conditions, can start a hunt at 50%

-A player looking at the ghost during a ghost event will lose sanity at twice the rate for the rest of the investigation (Those who don't witness it will not be affected) [In relations to the "ghost sickness".]

-If, when using the Spirit Box, the player receives the answer "Behind you", there's a 15% chance it will appear behind them as a ghost event. However, if they do not turn around to see it, they will only be affected by it as they would by a ghost event, without the sanity drain rate increase.

-If their name is mentioned, if the average party sanity is below 70%, there's a 10% chance the ghost will start a hunt nearby the player saying it's name, even if the player is far from the ghost room, unless there's a crucifix near the ghost at that time.

Strength: Saying it's name will anger it and may cause it to initiate a hunt nearby it's prey.

Weakness: It is easier to gather evidence, as it will likely never leave it's room.

Reasoning: Strength - Navajo believe that mentioning a deceased's name can call their ghost.

Weakness - Chindis haunt their place of death for decades, so much like the Yurei, it will usually stay in the place it died.

Enjaru Desc: The Enjaru is a Peaceful Ghost that is a Ghost that is mostly seen in Asia and Europe but this ghost could travel through every continent, When it Hunts it has the same hunting speed of a Raiju or Revenant and It could also act like an Poltergeist, Because It throws a lot of items in the ghost's ghost room, But This Ghost could Only Hunt with 10% Sanity and it could only kill 1 Player at 1 Game, And this Ghost is Much More Active during its Ghost Events and also much more active than any other ghost doing an ghost event perhaps it has an 70% Chance of doing One.

Extra Notes: The Escape the Hunt Objective has a chance that it will not be in the objectives.

This Ghost will never be added in Nightmare Mode And Professional

Weakness: Could Only hunt at 10% Sanity and Kill 1 Person at 1 Game

Special Abilities: It Could act like An Poltergeist and Revenant, And Have 70% Chance of Doing an Ghost Event.

Druntoko Desc: The Druntoko is An Japanese Ghost that is much more Aggressive after killing someone, This Ghost is Most likely to Be an Serial Killer or Just a Murderer that was killed a long time ago, If this Ghost kills one of your Teammates, It will be faster and Much more Active, Sometimes its Faster than a Raiju if its kills 3 Players, If your sanity hits 40% or the Ghost killed more than 2 of your teammates, the crucifix and the smudge stick is completely useless, The Only way to Survive this Ghost during its hunts is By Hiding. Because it will slow down and become powerless when it can't see a player in its visibility.

Extra Notes: This Ghost has an 20% of not being in Nightmare mode because of how hard to escape and survive this Ghost

Weakness: This Ghost has no Weakness.

Special Abilities: 40% Sanity and The Ghost killing 2 or more of your teammates will make the Crucifix and Smudge Stick completely Useless, and Becoming Powerful if it kills a Player