View source
watch 02:46
The Quarry - The Loop
Do you like this video?
Play Sound

8 bathrooms with a row of sinks

Main Door
Brownstone High School is a map in Phasmophobia. It is the first medium-sized map added to the game. Its square shape and general symmetry can make it intuitive to navigate, and its long hallways may make perpetual running almost impossible. This map unlocks at level 3.

Brownstone High School has one front and one side yard (separated from each other), about three dozen classrooms, eight bathrooms, a lecture hall, a cafeteria, and a gymnasium complete with two locker rooms.

Brownstone High School features five exit doors. Due to the large distance between the closest entrance and the van, it may be desirable to stage gear close to the building before entering.

See Third-party tools for a list of detailed map viewers that players may use. 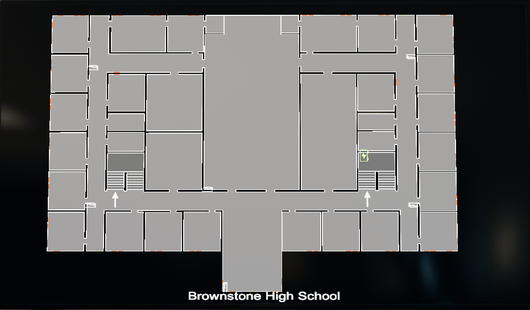 The in-game map of the first floor 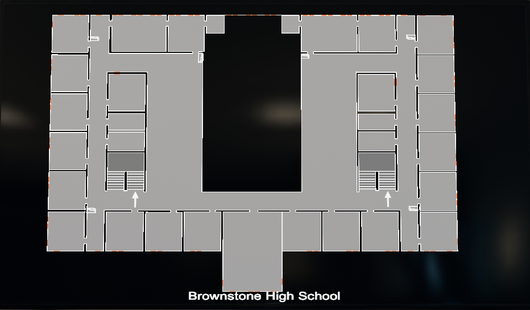 The in-game map of the second floor

Please note that the white bone model is no longer used.

Bones more often spawn near the middle of a room, depending on the room's geometry, though there may be some exceptions. As Brownstone High School has a very large searchable area, looking for the bone is usually not profitable.

First Floor, Right Side, Library. On the ground

Second Floor, Right Side, Storage Room 2. On the ground at the foot of a shelf

A bone in a second floor classroom

All cursed possessions spawn in the Lobby or in the immediate vicinity in the hallway.

The Voodoo Doll spawn on a bench in the end of the Lobby.

The Summoning Circle spawns in the end of the Lobby.

The Ouija Board spawns behind the left column in the Lobby.

The Haunted Mirror spawns behind the right column in the Lobby.

The Tarot Cards spawn on a bench along the left wall of the Lobby.

The Music Box spawn on a bench along the right wall of the Lobby.