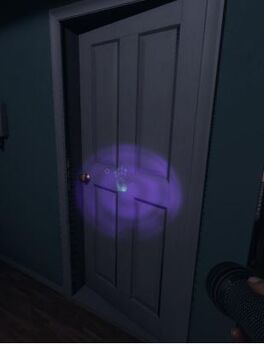 Fingerprints (or Handprints) are a type of Evidence created by Ghosts that help to indicate which type of Ghost is haunting the location. They are left behind by when they interact with the location's environment. You can see Fingerprints by using the UV Flashlight or the Glowstick.

A ghost will leave behind Fingerprints when it interacts with the environment, the most reliable being the following:

Other places where fingerprints can be found include:

Note that when the ghost flickers the lights or touches the Fuse Box, they may not always leave behind Fingerprints.

Sometimes, ghosts can leave fingerprints in strange places, such as the outside of the windows at Brownstone High School, though this is likely due to being a bug.

Fingerprints do not have to be visible when being photographed by a Photo Camera, and will be labeled as "Fingerprints" in the Journal. This may allow for Fingerprints to be discovered accidentally with an errant photograph. When Fingerprints evidence is suspected but can not be seen (e.g. small fingerprints on a cell door in Prison) , then one way to check for them is to take a photograph of the area and then look in the Journal for a photo labelled "Fingerprints."

Retrieved from "https://phasmophobia.fandom.com/wiki/Fingerprints?oldid=4348"
Community content is available under CC-BY-SA unless otherwise noted.