The Flashlight is a basic hunting tool designed to help you when the lights go out.
The Flashlight is a piece of Equipment used by players in Phasmophobia. It is the primary source of light in the game, cannot be turned off by the Ghost (unlike Candles which the Ghost can blow out) and, like all electronic devices, will malfunction during Hunts.

It has a more powerful, expensive variant, the Strong Flashlight.

Toggling on an equipped flashlight will provide a small conical range of light to improve visibility of the environment. On PC, the flashlight can also be put on the shoulder by cycling to another item, allowing its use offhand.

In VR, can be placed onto the toolbelt. Illuminated flashlights will continue providing light from the hips until a player manually turns it off. While on the toolbelt, emitted light will track the player's head movement.

Up to 4 regular flashlights can be brought on a single contract, alongside its Strong counterpart, for a total of 8 flashlights. One flashlight is always provided per contract as a starter equipment.

During a Hunt, the Flashlight will flicker on and off if a ghost is nearby. Like other electronic equipment, keeping the flashlight turned on during a Hunt will alert the Ghost of the player's presence, and should be turned off immediately.

Extra flashlights (especially obsolete normal Flashlights) can be dropped within dark areas of the map to provide uninterrupted illumination. This is especially helpful if a Ghost tampers with the lights and/or Fuse Box frequently. 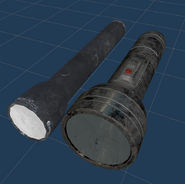