A Glowstick can be used to help navigate in larger locations or used as an area UV Light.

"Some Ghosts have been known to leave fingerprints on doors, windows and light switches. This will show up with a UV Light."

The Glow Stick is a handheld item that emits a UV light when used.

The Glow Stick can be thrown onto the floor to light up Footprints or Fingerprints. The height of the light is half of a doorway, enabling it to detect Fingerprints. Its length is equivalent to the height. It is able to clip through doorways and the light will go through some objects such as couches.

It is possible to detect footprints when placed near Salt, Fingerprints when near a doorway, or to visually mark locations of interest.

In certain locations, the glowstick will stop emitting light when thrown on the ground. It is not known what causes it, nor how to fix it, so propping it next to a wall is a good workaround. 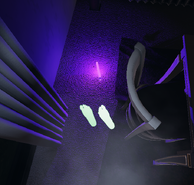 A glowstick lighting up Footprints.
Add a photo to this gallery

Retrieved from "https://phasmophobia.fandom.com/wiki/Glow_Stick?oldid=5727"
Community content is available under CC-BY-SA unless otherwise noted.