The Video Camera (also known as DSLR) is used to create a Video Feed which can be seen in the Van.

A Video Camera can be placed down similarly to the Ghost Writing Book. To place it, you must first point to an appropriate table, flat surface, or tripod, where an opaque version of the camera will appear. You can then rotate it by holding left click, and when you believe it is correctly situated, place it with the F key(or the applicable key bind). Once it is placed, left click on it to turn it on. This will be indicated with a green light on the back.

The Video Camera is one of the two ways of detecting the Ghost Orb evidence. The other is the Head Mounted Camera, which serves as a portable Video Camera. The Video Camera can also be placed on a Tripod to get better viewing angles.

The camera can also be used to maintain surveillance on areas such as hallways, rooms, and the breaker. This can allow for easy viewing of certain stationary evidence like Fingerprints, Ghost Writing, EMF Level 5, or Salt. Since cameras can still be used during a Hunt, they can be essential for determining the location of players stuck inside the building. 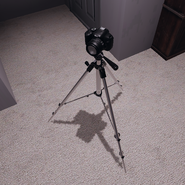 A Video Camera on a Tripod. 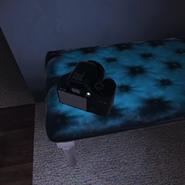 A camera with a green light indicating it is on.
Add a photo to this gallery

Retrieved from "https://phasmophobia.fandom.com/wiki/Video_Camera?oldid=5722"
Community content is available under CC-BY-SA unless otherwise noted.